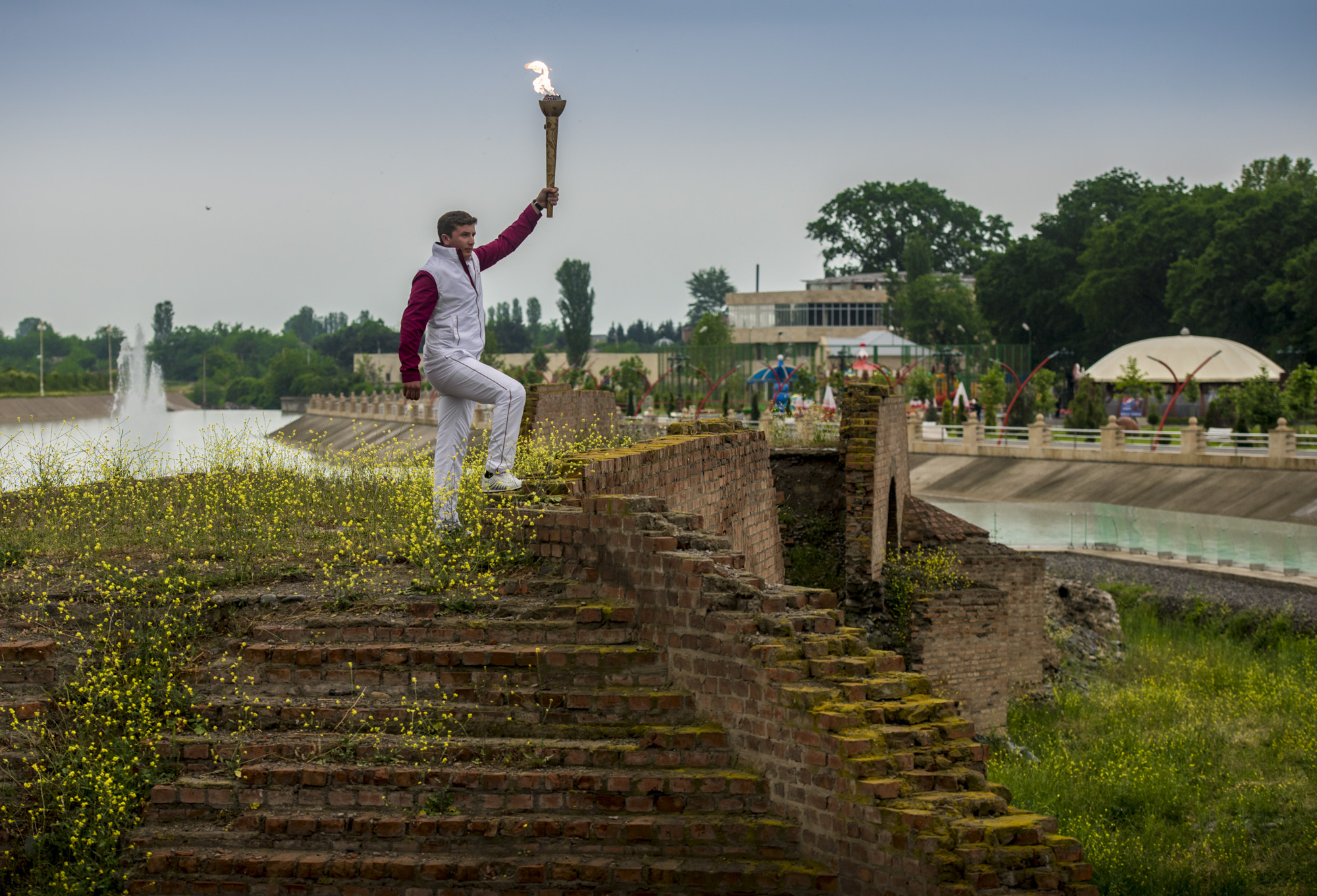 The official flame of the inaugural European Games was today welcomed to Barda by hundreds of local residents, who then took part in a spectacular Festival of Fire in the city’s Central Square.

Barda is part of an agricultural area notable for its extensive production and processing of cotton, silk, poultry and dairy products. It also lays claim to being one of the oldest dwelling places in the region, as shown by numerous relics unearthed during archeological excavations, including coinage dating back to the time of Roman Emperor Augustus.

The Journey of the Flame embraced the area’s rich history, stopping off for iconic photo shoots at the remains of a 5th century fort or ‘Torpaggala’, 14th century tombs known locally as ‘Mother of Aran’ and a 7th century bridge which crosses the Terter river.

The Festival of Fire took place in the early evening in a specially organised square where the atmosphere began to build long before the final torchbearer Fuad Agayev took to the stage.

The flame was then transferred to a commemorative lamp that will remain on display in the city until the Closing Ceremony of the Games on June 28.

Local residents were treated to a video projection depicting the official capturing of the flame at Ateshgah, and flamboyant dove-shaped balloons signifying peace were released into the sky. Official mascots Jeyran and Nar joined in the celebrations, and once again the crowd was enraptured with the signature fire show, which has been specially created to celebrate the Journey of the Flame at these festival locations.

Amil Aliyev torchbearer and transcaucasus youth champion mixed martial arts said: “The atmosphere here today is a reflection of how Barda is ready for this celebration. My participation in this relay is a clear indication of the value attributed to Azerbaijan’s youth and our place in society. Our former national leader Heydar Aliyev founded a sports school here and our current leader President Ilham Aliyev is maintaining that tradition. These Games will help to raise the profile of Azerbaijan’s youth around the world. It is great to see non Olympic sports also included in the programme. My coach has advised us on the importance of watching these Games live at the venues to get the experience of an International competition atmosphere. ”

The Journey of the Flame will continue to Goranboy and Naftalan tomorrow Thursday (14 May), for smaller welcome ceremonies.

For further information on the Journey of the Flame, please visit www.baku2015.com/flame