15th edition of Summer Paralympic Games – Rio 2016 has started officially on 7th September.
The Rio 2016 Paralympic archery competition runs from 10 to 17 September in the Sambodromo, same venue of Olympic Games.

Para archery has been integral to the Paralympic Movement since its beginnings, when the sport was used as a rehabilitation tool for injured veterans at Stoke Mandeville Hospital.

It has been present on the programme of every Paralympic Games since the event began in Rome in 1960.

Since the London 2012 Paralympic Games, the classification classes have been changed. (The alteration came into affect on 1 April 2014.)

1) Matt Stutzman is one of the athletes to watch at the Paralympic Games. A successful compound archer, Matt was born with no arms – making witnessing him shoot out the middle, holding his bow with his foot, incredibly impressive.

2) Mixed team events make their Paralympic debut at Rio 2016, replacing three-athlete team competitions included at prior Games. Mixed teams are made up of one man and one woman from the same nation, shooting in the same division.

3) Zahra Nemati, a London 2012 Paralympic Champion, shot at the Olympic Games in Rio – and has returned for the Paralympics. She’s competed on the Hyundai Archery World Cup circuit in recent years, rather than at para archery events, so isn’t world-ranked highly – but won the Asian Para Championships in late 2015.

Compound open: Like recurve open athletes, compound open athletes have impairment in either the top or bottom halves of their body, as a rule. They compete from a wheelchair, stool or standing using a standard compound bow, which conforms to World Archery rules.

Recurve open: As a rule, recurve open athletes have impairment in either the top or bottom halves of their body. They compete from a wheelchair, stool or standing using a standard recurve bow, which conforms to World Archery rules.

W1: Athletes have impairment in both the top and bottom of their bodies, compete while seated in a wheelchair, and may shoot with either recurve or compound bows – with slightly modified rules.

Athletes using recurve bows may also use mechanical release aids, while all bows are limited to 45lb in peak draw weight and may not have peep sights, magnifying scopes or levelling bubbles.

The top three world-ranked archers, in each division, as athletes arrive in the Sambodromo ahead of the Olympic competition. 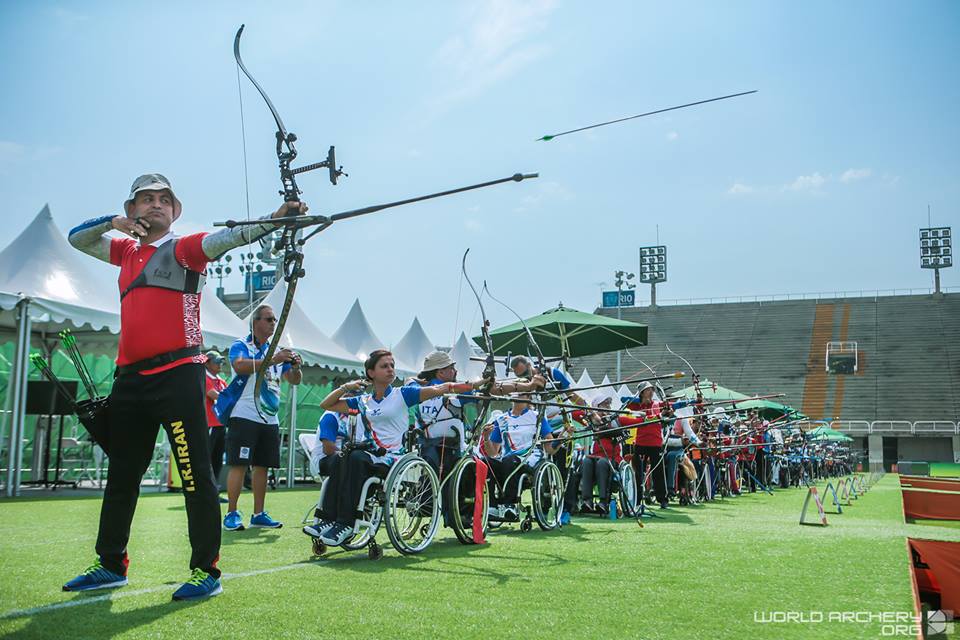