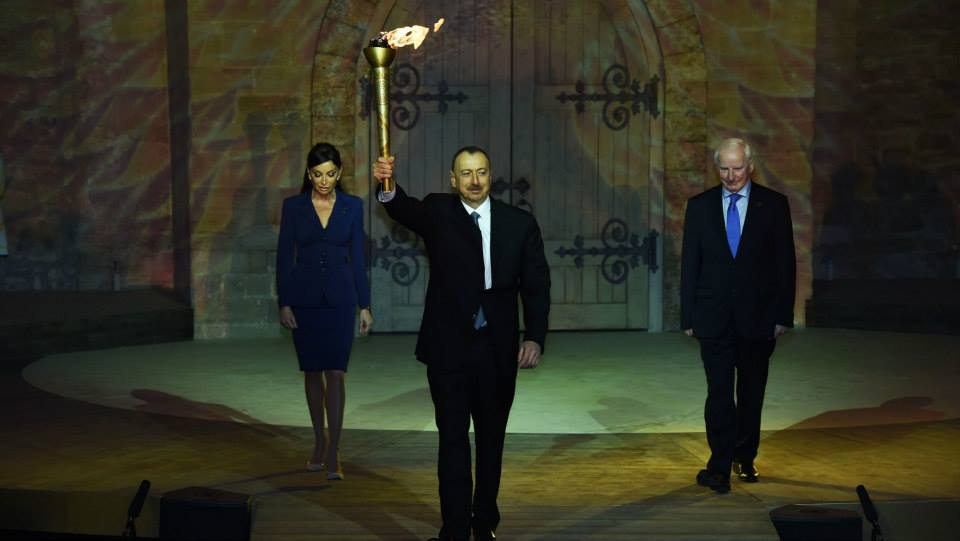 Yesterday, Sunday April 26, the President of the Republic of Azerbaijan Ilham Aliyev captured the official flame of the Baku 2015 European Games during a special ceremony that took place in the ancient and sacred temple of Ateshgah, Baku.

Also present at the event commemorating the start of the flame’s journey across Baku – The Journey of the Flame – was First Lady and Chair of Baku European Games Organising Committee Merhiban Alieyva and President of the European Olympic Committees Patrick Hickey, along with 150 distinguished guests.

Ateshgah, one of Azerbaijan’s most remarkable landmarks, stands on a site renowned for its naturally occuring flames, sacred to Zoroastrian fire worshippers for centuries. In a throw back to Ancient Greece where the Olympic Flame was kindled from the rays of the sun, Azerbaijan, ‘the land of Fire’ captured the flame for the first European Games from the earth.

President Aliyev began proceedings with a welcome address during which he said: “Our nation has truly harnessed the power of sport to effect positive change. Our capital city has been transformed through the many improvements in infrastructure in place for Baku 2015, ensuring a lasting legacy for the first European Games, and an innovative blueprint to pass on to the next host city.

The Torch Relay we will launch this evening will be an inspirational journey around Azerbaijan, led by torchbearers representing all sections of our community. It will showcase our country’s captivating natural beauty, while continuing to involve our entire population in the Games, in the spirit of unity and celebration through sport.”

President Hickey who praised Azerbaijan and all of its preparations to date said: “The Olympic values of excellence, friendship and respect are perfectly expressed through the Torch Relay. By passing the flame from one to another in a collaborative gesture, torchbearers spread a message of peace, friendship and celebration through sport.

Baku 2015 will come to life through the dedication and effort of your entire country. It has been an absolute pleasure working with the Azerbaijani leadership. Your professionalism and focus has never failed to impress us.”

Guests were treated to a display of national dancing and musical performances as part of the celebration of the Journey of the Flame before the President, First Lady and President Hickey entered the ancient temple to capture the flame.

At this point the gates of the ancient temple closed behind the First Couple and guests were able to view the historical moment on big screens outside the walls. An impressive pyrotechnic display errupted the moment the flame was captured and they returned back trough the gates.

President Aliyev was then joined by Olympic handball Champion Rafiga Shabanova who became the European Games first torchbearer as the President passed the torch to her and she began the Journey of the Flame.

In a celebration of Azerbaijan’s extraordinary landscape, culture and heritage, the flame will travel the length and breadth of the country, spreading the spirit of the Games and warming the hearts of people in 60 locations.

The torch will come within an hour’s travelling time of 99% of the Azerbaijan population and thousands of people are expected to join in the daily celebrations along the route.

Commemorative Baku 2015 Lamps will be left at each of the venues visited, remaining lit for the duration of the Games.

For further information please visit our official website on Baku2015.com/flame