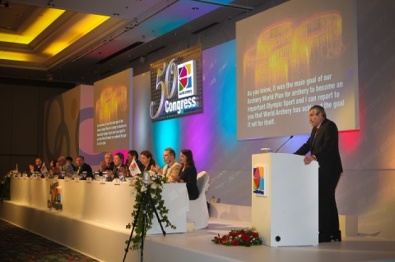 The 50th World Archery Congress was held in Antalya – Belek on 27-28 September with the participation of 98 Member Associations.

Prof. Dr. Ugur Erdener was re-elected President of World Archery with 93 votes in favour and 2 votes against.

For the Executive Board were elected for a four years term: Greg Easton (USA), Vladimir Esheev (RUS) and Aladin Gabr (EGY).

During the first day the Congress delegates were voted important proposed changes regarding the constitution and the organization’s rules. These are some of the decisions:

– Member Associations must manage their internal affairs with total independence. In case of external form of political, religious and other interferences, WA can act quickly.

– Remove half FITA round

Before the conclusion of the Congress, many awards were presented to some persons for their contribution to the growing success of archery.