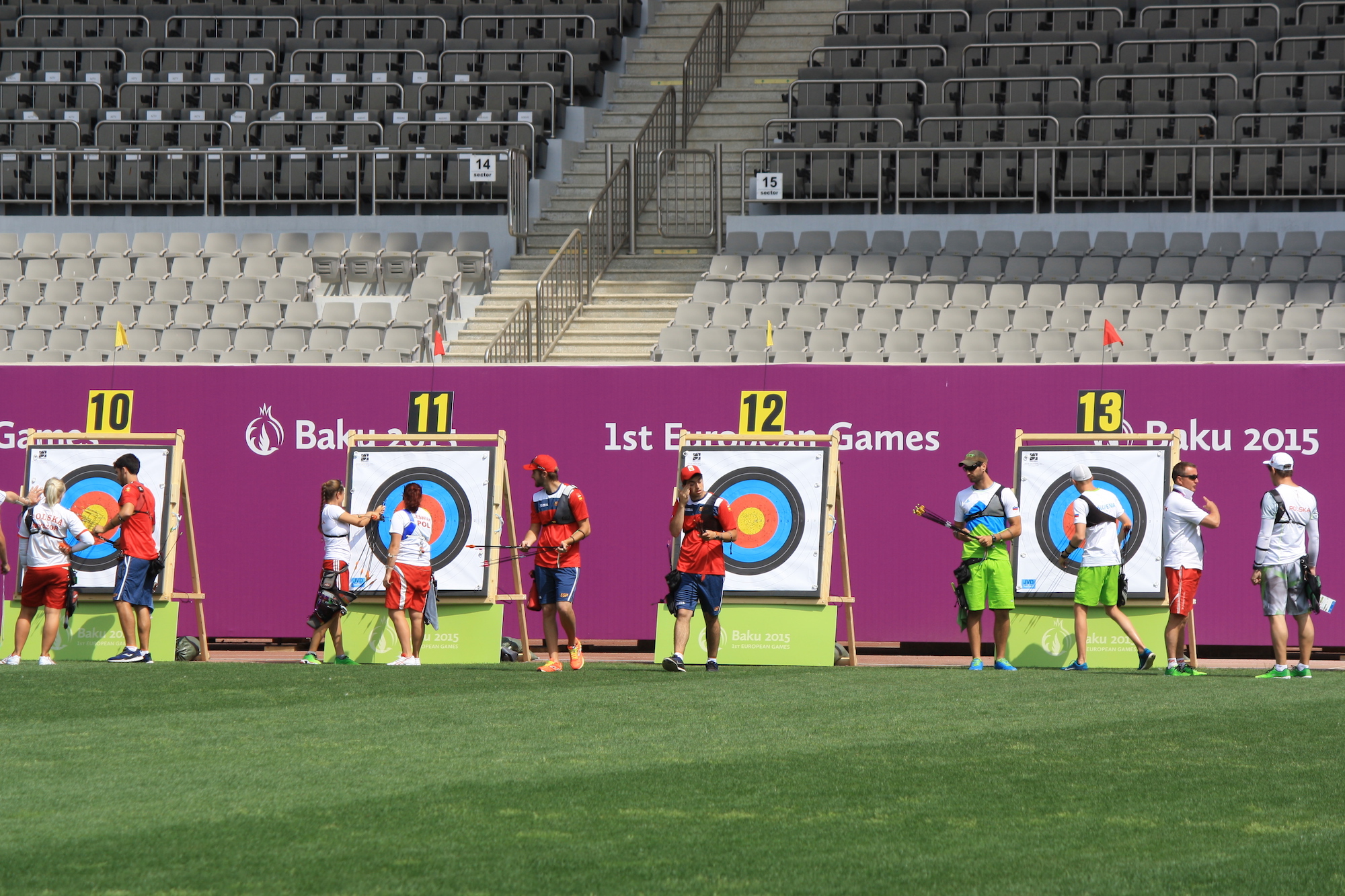 Something to know about Archery event at 1st European Games – Baku 2015.

Mete GAZOZ (TUR) and Yasemin ANAGOZ (TUR), both 16 years old, have been competing in the 2015 World Archery Youth Championships in Yankton, South Dakota, which runs from 8-14 June, while the ranking round at Baku 2015 starts only two days later.

ANAGOZ shot the sixth-highest score in the Yankton ranking round for the recurve cadet women’s competition and made it to the quarterfinals, while GAZOZ lost his first match to eventual quarterfinalist Ka Lok WONG of Hong Kong.

The youngsters have endured a punishing schedule in recent weeks, having competed in the World Cup event in Antalya, Turkey, which ended on 31 May, before heading to America.

Turkish team coach Alper AYTACOGLU said: “It will be hard for GAZOZ and ANAGOZ after Antalya and Yankton. They will be here 15 June and 16 June. They have to compete. But the field is good, all conditions are suitable and I don’t think that our team will strain.”

“I took up archery as a hobby in 2003 and a couple of weeks later Martin, who was only 11, started following me there,” said GRISCHKE senior as he watched his son train in the Tofiq Bahramov Stadium on Friday.

“At home, facilities are basic. We are a small club, we have a dozen archers, and only five of them serious,” he added.

The younger GRISCHKE, 23, said: “I was the first one to shoot internationally for Liechtenstein. Now I am starting to be recognised as an archer. We changed public attention and awareness. Archery now is more visible.“

When Marvin is not training, he is a student of health science and technologies in Zurich.

“For me archery is only possible because I am lucky enough to be a student. I could not train as well with the pressures of work,” he said.

His father says Marvin needs to remain in education as long as possible to fulfil his archery ambitions. “We are supporting him and we will try to prolong his studies, to keep him going this way,” said GRISCHKE senior.

The athlete is now taking aim at an even grander target – the Rio 2016 Olympic Games. “Rio is a big dream” he said.

And Liechtenstein Chef de Mission Robert BUCHEL-THALMAIER (LIE) has given the young archer words of encouragement. “We have had an archery federation in Liechtenstein for many years but with Marvin it is the first time we are competing internationally. Now he has qualified for Baku, we think he has a chance for Rio and we are fully behind him” said BUCHEL-THALMAIER.

“I was a bit surprised to be named flag bearer, but because there are only three of us here, there was always a chance. It was a bit of a lottery, but I am honoured, of course. This is the biggest expereicnce of my life so far. I’m already a bit nervous, but I know it will get worse.”

Quotes from Luxembourg flag bearer Jeff HENCKELS before the European Games Opening Ceremony at the Olympic Stadium on Friday.

“I normally miss the opening ceremony at the Olympics because my competition is the day after, but here it is different so I can not only go to the ceremony but I get to carry my team’s flag as well.

” I’m very excited, everyone wants to do this, especially to do it for the first time. Of course, I will remember it for a long time. I’m not nervous yet, but maybe when I get to the stadium I will feel it, but I think it is going to bea great experience.

“These Games are extra special for Luxembourg because at Olympic Games we always have really small teams. Here have a bit higher profile.“

Amateur archer Emanuele GUIDI is delighted to have the chance to put his tiny city state of San Marino on the map in the European Games.

GUIDI, who revealed he only scraped into the competition, took up the sport only eight years ago as a hobby. As well as being an archer, he is a crossbow shooter and hang-gliding enthusiast.

He is also San Marino’s chief flag-waver, a prestigious role in the pageants of medieval tradition that are still going strong among the 32,000 people in the ancient hill-top city state which lies within Italy.

“I came across archery eight years ago,” 45-year-old GUIDI said after training at Tofiq Bahramov Stadium. “It all started as a hobby but I became passionate about it. Thanks to San Marino being such a small place, I had the chance to participate in the London 2012 Olympic Games with an invitation card. I qualified for Baku at the last minute, in Greece at the Grand Prix. For me it is wonderful to be here, I am honoured to show the world we exist,” he said.

GUIDI is trained by Italian Olympic veteran Andrea PARENTI (ITA), who won bronze at Atlanta 1996 and silver at the World Archery Championships in 1995, but revealed he does not spend enough time with the coach.

“We San Marinesi are used to being alone and to struggle,” GUIDI added. “I have a demanding job in running my company, a wife and two kids, and I manage to see my coach only a couple of times a month because he lives quite far away.“

Ireland archer Sinead CUTHBERT CUNNINGHAM found her mind wandering during competition in 2014. Now there is an elephant in her sister’s room.

“You’re always trying to find different ways to train and to find your focus,” CUTHBERT CUNNINGHAM said. “Knitting I find is really good for that because you have to focus on what you are doing, and stay on the task at hand. I knitted a pink elephant for my sister. I hadn’t really practiced stitching things together and I wanted to learn to stitch things before I made clothes, so I decided to make her this pink elephant. It was supposed to be grey, obviously, but she really, really loves elephants and I thought grey was too boring, so I switched it to pink.”

CUTHBERT CUNNINGHAM’s family is never far from her archery journey.

She is coached by husband Martin CUNNINGHAM (IRL) and following the disappointment of missing qualification for the London 2012 Olympic Games in a shoot-off, Sinead’s sister was nearby.

“After I didn’t make it to London, my sister had bought tickets to see the final so I went to watch the women’s final, which was nice. So I’ve seen what it looks like, I’ve felt the pressure in the room and it’s just something I really want to do, so it’s made me more focused to get to Rio (2016 Olympic Games).”

The 33-year-old holds every Ireland outdoor recurve women’s national record, but she has arrived at the Baku 2015 European Games without visions of glory.

“I don’t have a particular finish position in mind. My goal is to shoot every shot along my process and as long as I don’t deviate from that I’ll be happy coming away from the tournament, regardless of what I do.” she said.

One thing CUTHBERT CUNNINGHAM will do at Baku 2015 is keep knitting and she hasn’t ruled out trying her hand at Azerbaijan’s favourite fruit, the pomegranate.

“Maybe. The seeds were great coming down at the opening ceremony.”