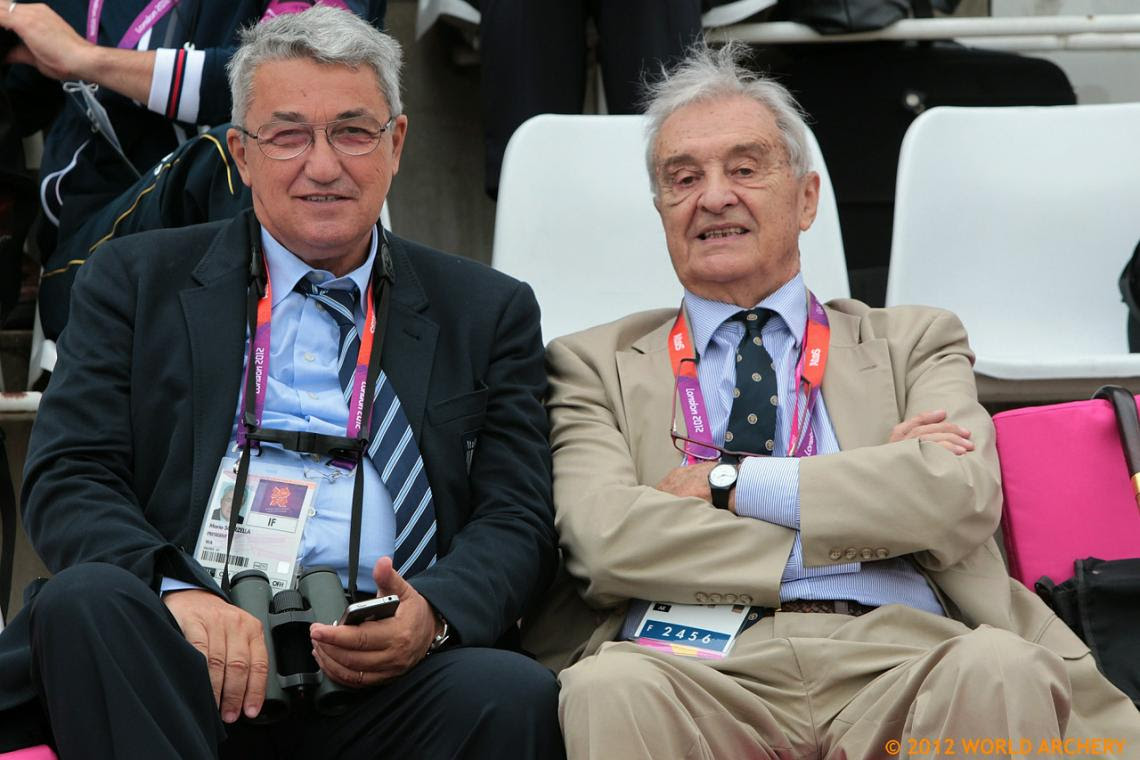 Former World Archery president Francesco Gnecchi-Ruscone has died in Milan on 20 September 2022 at the age of 98 after a period of ill health.

Gnecchi-Ruscone served as seventh president of the international federation (then called FITA) from 1977 to 1989 before being made honorary president by his successor, Jim Easton. He was also chair of the board of justice and ethics for more than 20 years until 2011.

During his tenure, he successfully worked with the International Olympic Committee to add team events to the Olympic Games in Seoul in 1988.

The Grand FITA, the sport’s early move towards a spectator-friendly competition format, was also introduced during his presidency, and Gnecchi-Ruscone led a restructuring of the federation’s governance, expanding the scope of the executive board and the continental associations.

He was president of the Italian archery federation from 1969 to 1981, a period during which it grew from six clubs to 60 and joined the Italian Olympic Committee, on which Gnecchi-Ruscone subsequently served as a member.

He was also a member of the council of the Global Association of International Sports Federations.

Gnecchi-Ruscone was awarded a gold plaquette by World Archery in 1981 in recognition of his services to the federation. He set the foundations for the sport’s evolution from an Olympic return in 1972 to its becoming professional at the turn of the millennium.

Despite his understanding of the politics of international sport, he remained adamant that archery’s strength was in the grassroots.

During an interview in 2017, he said: “Archery is not just the world championships and Olympic Games, it is the friendly atmosphere with, perhaps a limited spirit of competition, but a great friendliness and correctness.”

“One of the things I’m still very proud of, of World Archery as well as FITA before, is that our board of justice never has anything to do. When you see the amount of litigation and disorder and sanctions which happen in other federations and, I think at three congresses out of four, the board of justice has to report that they have nothing to report. I think that’s a very healthy sign.”

An architect by profession, Francesco was an avid athlete, practising rowing, equestrian, trap shooting, sailing and long-distance swimming, as well as shooting a bow.

He was also a talented painter and a published author, credited with his first-hand account of Italian resistance during the Second World War and, most recently, a collection of watercolours titled La Vita è Bella, ‘life is beautiful’.

“Intelligent and refined, with an incredible passion for his pursuits in life, which included archery and our organisation, Francesco will be warmly remembered for his great contributions to our sport,” he said.

“We are fortunate that even beyond his service as president, during which he achieved so much, he remained heavily engaged with World Archery, regularly attending congresses and participating in discussions that shaped its present and future.”

“On behalf of the World Archery family, my heartfelt condolences go to his family and friends.”

“I often told him that it was a pity that he didn’t write a book on his time as FITA president since his other books are a joy to read. We compromised, doing a long video interview with him and confidant Beppe Cinnirella, our former secretary general, which will preserve their insights in longevity. He was a true diplomat and a master in finding solutions.”

“Francesco’s contribution to the world of sport and archery in particular is very significant. Thank you for the valuable lessons you gave me during our many enjoyable meetings and my most sincere condolences to all of your family.”