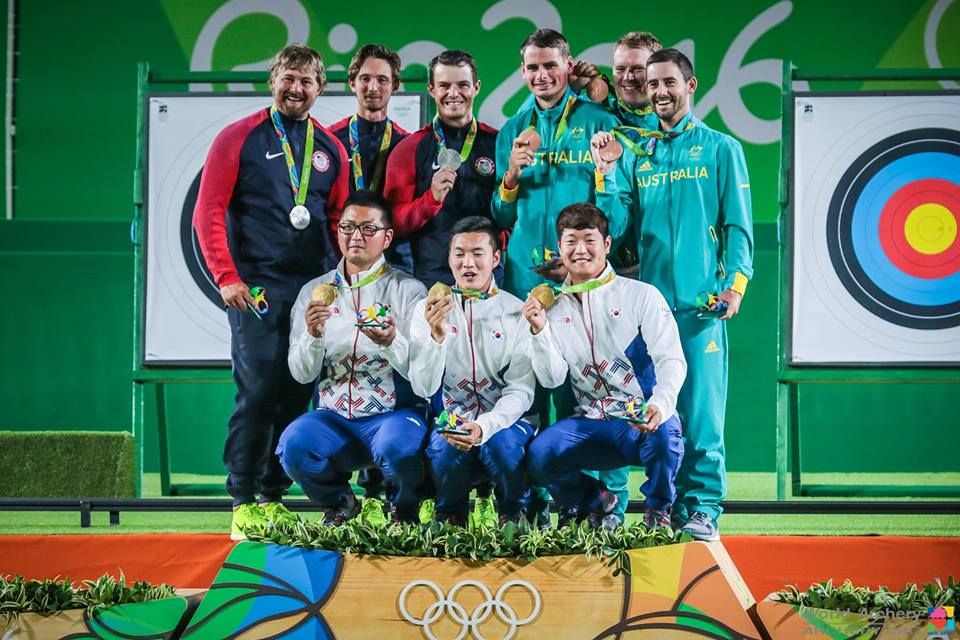 The Korean team was nearly perfect, dropping just three points in 18 arrows to take archery’s first Olympic gold at Rio 2016. And no European Teams on the final podium.

World number one Korea shot consecutive sets of 60, 58 and 59 points in the Olympic final to beat the USA to the recurve men’s team gold medal, archery’s first available Olympic Champion title at Rio 2016 – and the Korean National Olympic Committee’s first medal of the Games.

“This was teamwork. Everybody did good and you cannot say that just one person was outstanding,” said Kim Woojin, who set a new world record on the ranking round in Rio.

The Korean team, with Kim as its leader, looked like a real team.

He spoke to teammates Ku Bonchan and Lee Seungyun throughout the match, while the USA was on the line.

“I’ve played this game for four years, that’s why we talk a lot. We say that we believe in each other and try to have confidence. We talk all the time to cheer for each other,” he said.

Korea stated its claim to the title in the opening set.

Six perfect arrows made Kim, Ku and Lee’s intentions in the final clear, and they quickly jumped 2-0 set points up, despite a respectable opening 57-point set from the USA.

Both Kim Woojin and Lee Seungyun’s arrows at the start of the second set went wide nine. Brady Ellison, Jake Kaminski and Zach Garrettopened with a 30 – but then followed it with three nines, for 57. It was the Koreans’ turn to shoot 30, and claim the second set by a point.

True to form, the third and final set of the match went the same way.

The USA scored 56 of a possible 60 points, Korea had 59 – shooting another three consecutive perfect 10s to close out the match and take archery’s first gold medal of the Rio 2016 Olympic Games.

In their three men’s team matches in Rio, the Korean men didn’t surrender a single set point. Kim, Ku and Lee averaged 58 points a set during the competition, on the way to winning Korea its fifth Olympic Champion title in the men’s team competition, after 1988, 2000, 2004 and 2008.

The USA men, with two returning athletes from London in Ellison and Kaminski – joined by third athlete Garrett – won a second consecutive silver medal in the event. In London, the USA team beat Korea in the semifinals before losing the gold medal match to Italy.

Four years later, in Rio, an entirely new-look Korean men’s team put on one of the best displays in Olympic history to ereverse the two nations’ fortunes and take Olympic gold.

“I never thought the Koreans could shoot that great. Korea never had such a strong men’s team,” he said. When asked what the USA could have done differently, he added: “How do I know? The Korean team did such a great job there.”

Australia won the bronze medal match ahead of China.

It marked Australia’s first medal of Rio 2016 and the nation’s first Olympic archery medal since Tim Cuddihy took individual bronze in Athens in 2004.

Competition in Rio continues today with the recurve women’s team eliminations and finals.