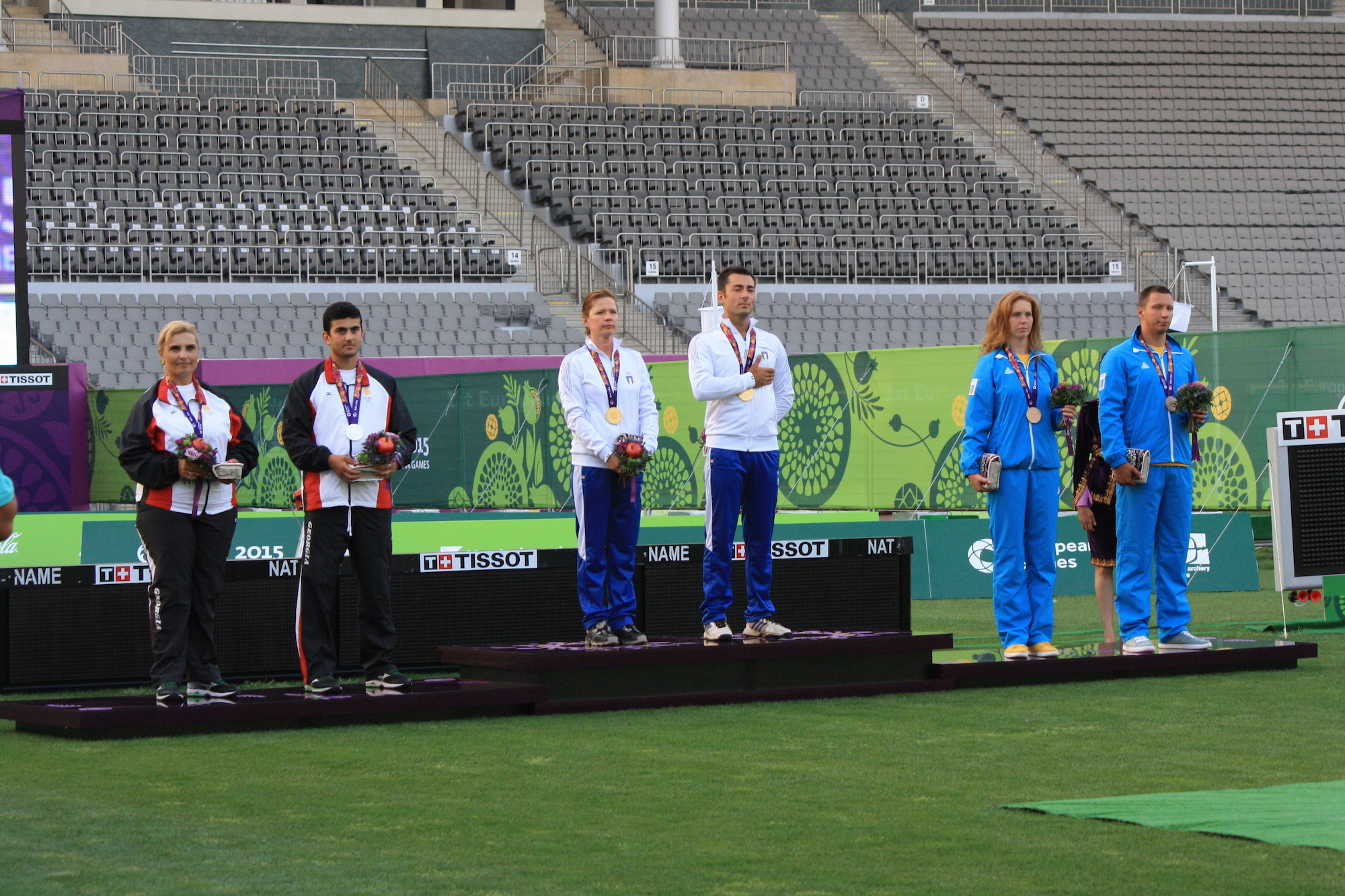 On the 2nd day of competition at 1st European Games, first medals come from the Mixed Team event.

Quotes from gold medallists Natalia VALEEVA and Mauro NESPOLI (ITA), after they beat Georgia 5-3 in the final at Tofiq Bahramov Stadium on Wednesday.

On shooting with NESPOLI:

“The maximum that could be done, we did it thanks to Mauro. The nice thing about this competition is that the best are here and when the going gets tough, the tough start playing.”

On what it takes to win with the new scoring system:

“This set style of competition is very stressful. Despite all our experience and our world ranking, in every set we have to give our maximum. We have watched the strong teams being beaten. In this type of competition you always need to shoot 10. If you make a mistake, you don’t win.”

On the rest of the competition:

“It’s very nice to win this evening but tomorrow we have to fight our best for our friends in the team. If they shoot as well as us, we will win.”

On losing the first set in the semifinal and the final:

“Usually, we use the first few arrows to calibrate the sight. After that, we go.”

On winning again, three years after clinching gold at the London 2012 Olympic Games:

“It was time to get another gold. Winning it here fills me with pride. It is the first gold medal for Italy at the European Games and this makes me very proud.”

On winning a silver medal with PKHAKADZE:

“I am so happy, we did great. I am very happy that I am shooting with him. Whenever he shot 10, I was so excited and so happy. The final match was really hard but in the end I think we did our best.”

On winning a silver medal:

“I can’t explain my feelings, I am shocked. It’s so amazing.”

On shooting in the final:

“It was not so stressful. We were calm when we shot. Shooting with Khatuna makes me feel calm.”

On how they will celebrate:

“We are very happy but we can’t really celebrate because there was a disaster in Tbilisi and so many people died there. Because of that I don’t think we will celebrate. We will wait until the end of the Games.”

Quotes from Lidiia SICHENIKOVA and Heorhiy IVANYTSKYY (UKR) after they won the archery mixed team bronze medal 5-1 against Slovenia.

“I am satisfied with our work, but I think our main goal is ahead of us. I’m sure we will have more medals in the Games.”

“We are happy to have won medals here.”

“The strongest Europeans were here, yes we have medals, but the world championship which is giving places to the Olympics, is ahead of us and it’s very important for us.