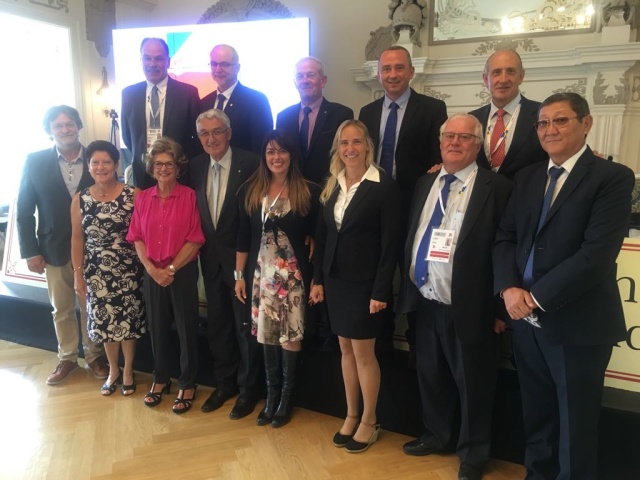 Mario Scarzella was confirmed as President of the European Archery Federation. Alessandra Colasante is the new Secretary General instead of Marinella Pisciotti.

On the eve of XXVI European Outdoor Archery Championship in Legnica (POL), this morning was held the World Archery Europe Elective Congress that has seen the confirmation in the role of President, for the fourth consecutive term, Mr. Mario SCARZELLA, with 41 votes out of 42 (1 abstained).
Mrs. Marinella PISCIOTTI has resigned as Secretary General: she bacame Executive Secretary of the European Federation in 1996, then was elected WAE Secretary General in 2000 and reconfirmed in this role in the following congresses in 2006, 2010 and 2014. His greeting during the Assembly was welcomed with a standing ovation of thanksgiving by all presents and in his place was elected Alessandra COLASANTE, new World Archery Europe Secretary General.

Other positions to renew: Hakan CAKIROGLU (TUR) was confirmed Vice-President for 4 years and, always for 4 years, were confirmed also the advisors Sabrina STEFFENS (GER) (32 votes) and Daniel PAVLOV (BUL) (25 votes). Darko UIDL (CRO) (22 votes) entered in the Executive Board, with a 2-year assignment, instead of spanish Vicente Martinez ORGA. Finally, Maria KIRILLIPOULOU (GRE) (23 votes) was elected for 2 years in the Youth Commission.

The statements of the President Scarzella
These are the words of President Scarzella immediately after the votes: “First of all, I would like to thank the outgoing Secretary Marinella Pisciotti: his contribution to the growth of archery in many years of activity has been really extraordinary and the standing ovation was the tangible proof. In its place has taken over Alessandra Colasante, who will surely be able to continue the excellent work done by Marinella“.
As regards his confirmation, Scarzella adds: “Receive confidence for the fourth consecutive term represents an honor and a great responsibility. It was a Congress with a very high number of participants and obtaining all the votes, with only one abstained, represents for me a double satisfaction. It was a very constructive Congress, we talked about the rules and the programme aimed to the development of youth activity, one of the fundamental points that we will take forward in the coming years. I am happy for the confirmations in the Council and I congratulate the new Croatian member. I wish great time to all the Executive Board: we will put all our efforts to better meet the needs of our wonderful sport“.
“I am sure that, keeping the course undertaken in all these years, we will continue to perform a useful service to the growth and development of archery in Europe, with the aim of maintaining at the highest levels Nations that have a winning tradition and to support all the countries that have objectives and desires to emerge in the continental panorama, and not only“.

WAE President Mario Scarzella, also Italian Archery Federation President and World Archery Vicar Vice-President, was elected to the Council of the European Federation (formerly Emau, from 2012 World Archery Europe) for the first time in 2002 and became President of the Continental organism in 2006, a position that was confirmed in 2010-2014, 2015-2018 and, following the Congress of Legnica, will remain in charge for another four years, till 2022.