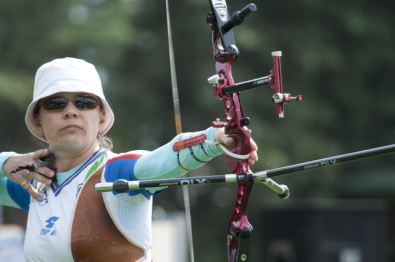 Before the start of the Olympic Final Quota Tournament in Antalya, Italian champion Natalia VALEEVA, one of the most successful athletes in the history of archery, said goodbye to competition.
The 10 times World Champion Natalia Valeeva has decided to said goodbye to competition and will do this in a big way, just a few minutes before the start of the Olympic Qualifying Tournament.
World Archery has accepted the initiative of the Italian Archery Federation letting Natalia greet the world of archery on a important stage such as the World Cup in Antalya.
Born in 1969 in Tirnauca (MOL), she competed with the Soviet Union and Moldova Federations from 1989 till 1996. After being married to an Italian Archer, she moved in Italy, where she has three beautiful children; she made her debut with the Italian National Team in 1997 and continued to write great pages in the history of international archery.
After 6 appearances at Olympic Games (Individual and Team Bronze in Barcelona 1992), 2 Golds at the European Games – Baku 2015, 10 World titles, 6 European titles, 2 Golds at Mediterranean Games, 11 podiums in World Cups, 6 podiums in Grand Prix, 6 world Records and 39 Italian titles, she decided to greet her teammates who shot in qualifying tournament, winning a place as team for Rio 2016.
Take a look at the commemorative video
This website uses cookies to improve your experience. We'll assume you're ok with this, but you can opt-out if you wish. Cookie settingsACCEPT
Privacy & Cookies Policy