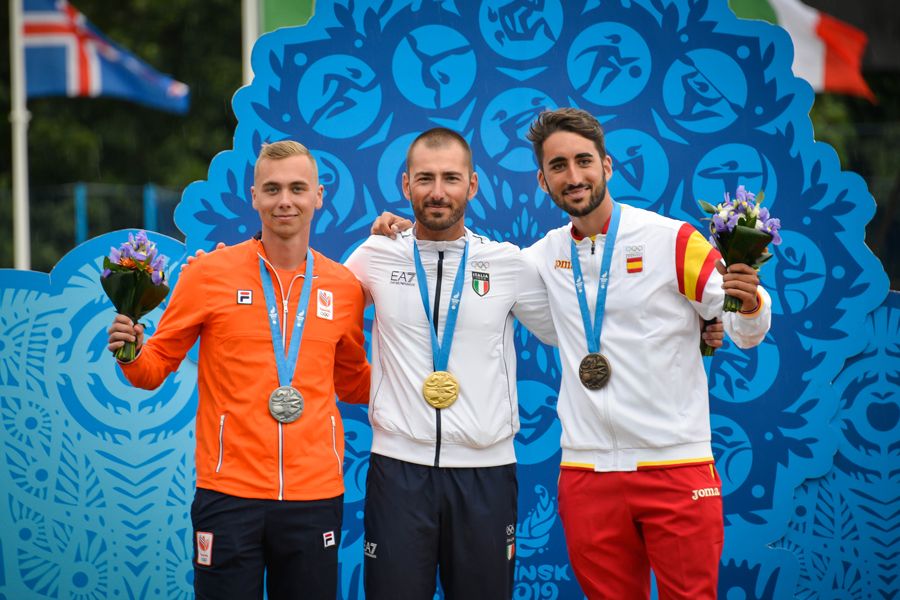 “It’s very important because I worked a lot on the mental side to be stronger in the individual competition,” he said. “It’s working so I’m very happy. I hope that this could be the first of a lot of victories.”

Nespoli already had a gold medal from the mixed team competition in Minsk and his Italian teammate Tatiana Andreoli won the recurve women’s event.

In the recurve men’s final, the fourth-seeded Italian archer and number-10 ranked Wijler were tied heading into the last set. In aggressive and inconsistent winds, Nespoli ploughed down a perfect 30 to finish.

It beat his Dutch opponent’s 28 and was enough to secure the match, 6-4, along with only the second major individual victory of Mauro’s career.

Despite years at the elite level and plenty of team podiums, the 31-year-old’s only previous international gold came at the Hyundai Archery World Cup stage in Salt Lake City in 2018.

This was Wijler’s second silver medal at the European Games in Minsk.

“I’m really happy. We got silver with the team and silver individual. Of course, we always come for gold – but I’ll get that next year,” he said.

There were two Olympic quota places available in the recurve men’s individual competition in Minsk.

These will not be officially awarded until a report from the event is evaluated. This particularly regards an appeal in the third round that affected the result of the match between Sjef van den Berg and Dan Olaru.

If the final results are approved for Olympic qualification, as it stands, Spain will receive one place due to Acha’s bronze medal. One additional men’s quota spot will then be made available at the final qualification tournament next spring.

Confirmation of how the men’s Olympic quota places in Minsk are awarded will be released at a later date.

Italy topped the table in Minsk with three gold medals, one silver and one bronze; 2nd place for Netherlands (5 medals too) and 3rd place for Russia (2 medals).

Dutch world number one Mike Schloesser won the inaugural compound men’s title at the 2019 European Games in Minsk, Belarus after beating Gilles Seywert of Luxembourg by a single point in the final.

“It was a really exciting day, to be honest, really tough conditions, and I’m happy how I handled it mentally and physically,” said Schloesser.

With most of the competition held in blazing sunshine, the last day of men’s competition in both the compound and recurve events was marked by strong gusting wind and torrential rain showers.

“The final round was one of the windiest rounds I shot. I shot two really good shots which were just out, and the last one nearly blew me over,” said Mike.

Already one of the most decorated compound archers in history, Schloesser takes his first individual title at a multisport event with this gold medal in Minsk. He also won silver in the mixed team competition with Sanne de Laat.

The silver medal was Luxembourg’s first podium of the 2019 European Games. Seywert wore a gigantic grin on his face from the start of the final to the end.

“I’m always smiling, in a good mood. There are many volunteers, judges who have to work on the field all day long,” said Gilles. “So I try to give my best for shooting good matches and to motivate people to be in a good mood, to share the positive things, and that helps me a lot, in life.”

The end of the compound men’s event was also the end of the archery competitions at the 2019 European Games in Minsk. The next edition of the continental multisport event will be held in Krakow, Poland in 2023.