It was archery’s first international event since before the COVID-19 pandemic.

Poland’s Lukasz Przybylski and Magdalena Smialkowska claimed their first international podiums as they won the compound men’s and recurve women’s events at the 2020 International Antalya Challenge.

Artem Makhnenko of Russia and Andrea Marcos of Spain also collected victories at this first major tournament following the end of the competition hiatus, which was in place from March to September due to the worldwide pandemic.

More than 100 archers from 13 countries competed in Antalya.

Lukasz Przybylski shot an impressive qualification round to seed second behind home favourite Evren Cagiran of Turkey. The pair would eventually meet in the final – with the Polish archer appearing the underdog.

Trailing by three points after three arrows he slowly eked his way back into the match. Evren had a chance to win it with his last shot – but landed a nine, leaving the contest tied at 145 apiece.

“I thought nothing,” said Lukasz. “I tried to make a good shot and not think about the outcome. So, make the good shot – and that‘s everything.”

The Polish archer delivered a 10.

Evren, although matching the arrow on points, couldn’t beat it on position – and Przybylski won the closest-to-the-centre shoot-off, making his first international podium finish a gold-medal-winning one.

The 26-year-old is likely to increase his current 33rd spot in the world rankings with the result.

Archery currently sits in a transition period. Athletes can add to their ranking points with results at major events – but no points will depreciate until at least the start of the outdoor season in 2021. 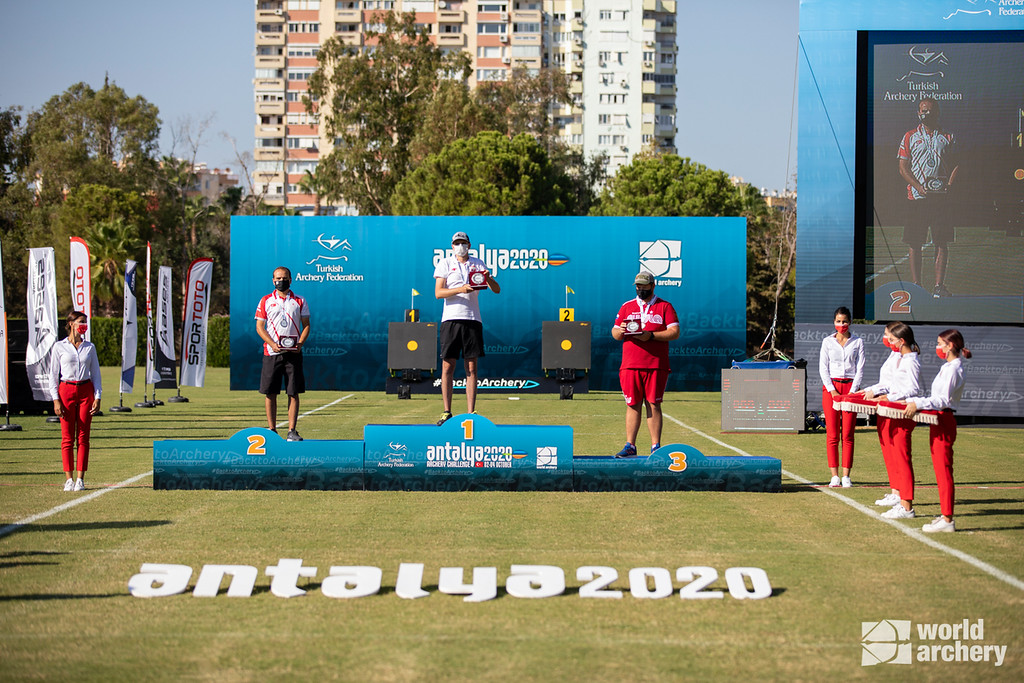 The 22-year-old, who seeded 11th, was up against an even-more surprising finalist. Spain’s Sandra Cebrian ranked just 29th but upset former-world-number-three Inna Stepanova to spring her run at the medals.

In the final, Cebrian was undone not by her wobbly first set – but by eights in the second and fourth series. Smialkowska took advantage both times, winning those sets and eventually the match, 7-1.

“It’s a very good feeling. I don’t know what to say, I‘m very nervous now and so happy,” she said.

Magdalena and Lukasz’ results point to a bright post-pandemic future for Poland, which hasn’t produced a consistent challenger for international wins since Justyna Mospinek and her Archery World Cup Champion season in 2008. 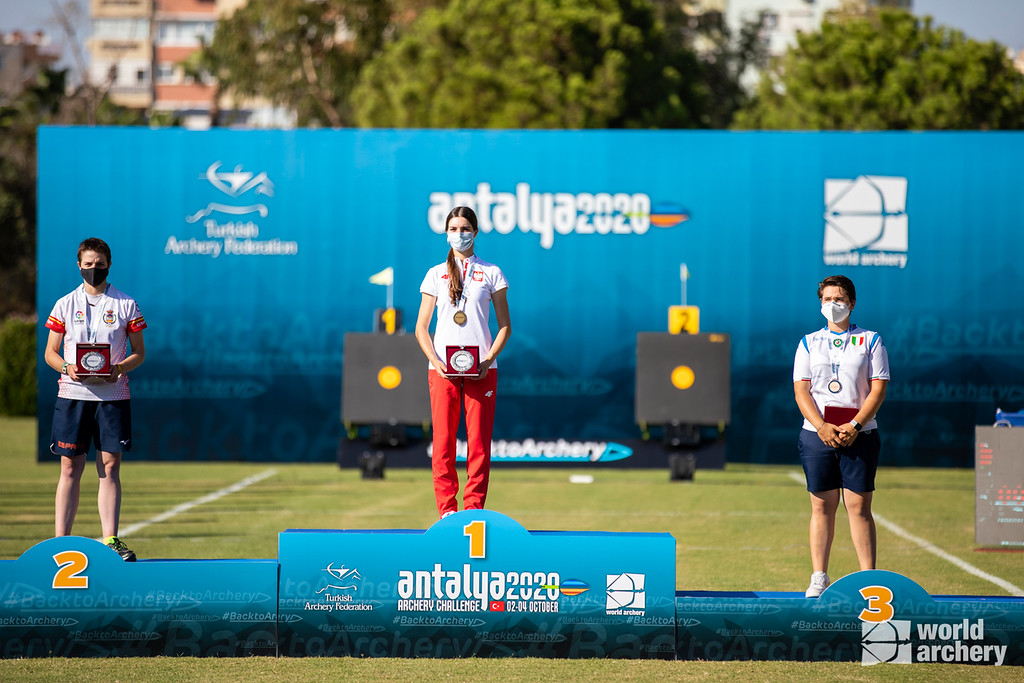 The remaining titles in Antalya were won by more experienced archers in Artem Makhnenko and Andrea Marcos.

Spanish archer Marcos defeated Russian newcomer Elizaveta Knyazeva, 145-141, in the compound women’s final. Knyazeva had an early advantage but landed a pair of eights in the third and fourth ends to fall behind.

Andrea only got stronger as the match progressed.

“The finals are always very tense so you take it arrow by arrow,” said the 31-year-old, who also works as a physiotherapist. “You get better towards the end because you lose those initial nerves. I wish I knew how to start the same way as I finish.” 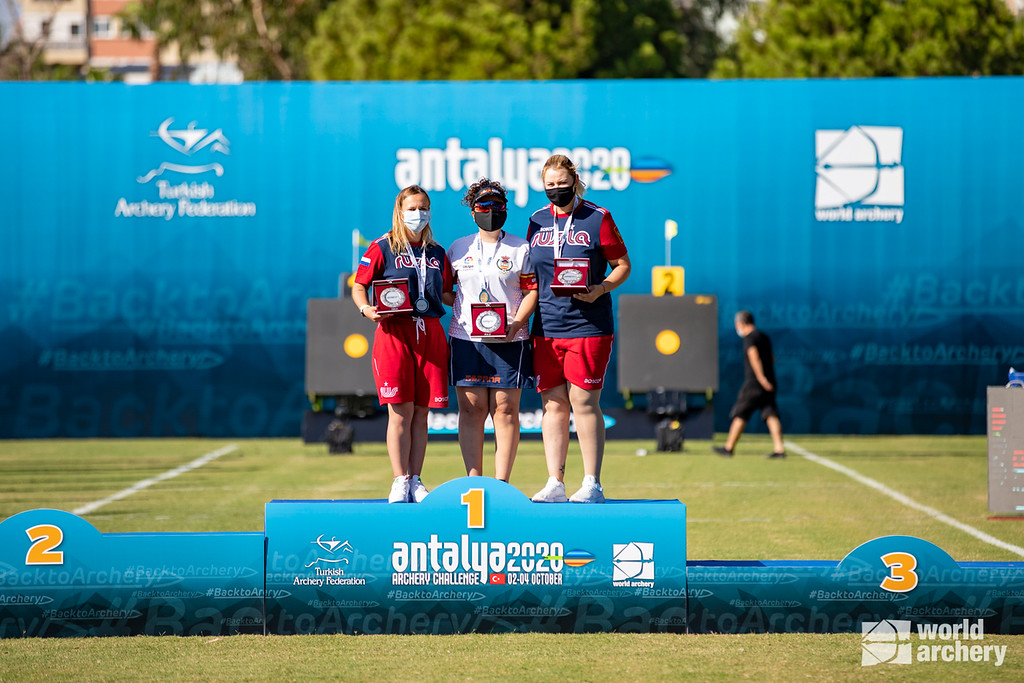 The Russian archer had shot a competition best of 685 points for the 72-arrow 70-metre ranking round, his first time over 680, on Friday to take the second seed in the recurve men’s event.

After top-ranked man Mete Gazoz fell to Federico Musolesi in a quarterfinal shoot-off, it was Musolesi’s Italian teammate Alessandro Paoli that faced Artem for gold.

It was not the cleanest of finals. They traded the first few sets and went into the fifth tied at 4-4. Alessandro shot 29 and Artem, with two 10s already in the target, calmly delivered his third to finish with a 30, taking the set and the match, 6-4.

“I wasn’t thinking about anything particular in that moment,” he said when asked about that high-pressure final arrow. “I just went out to the line and shot a 10.”

Currently ranked 13th in the world, the 24-year-old said he has been training at a three-metre target in his apartment during the summer lockdown. The Russian team had a training camp in Turkey to prepare for this 70-metre tournament. 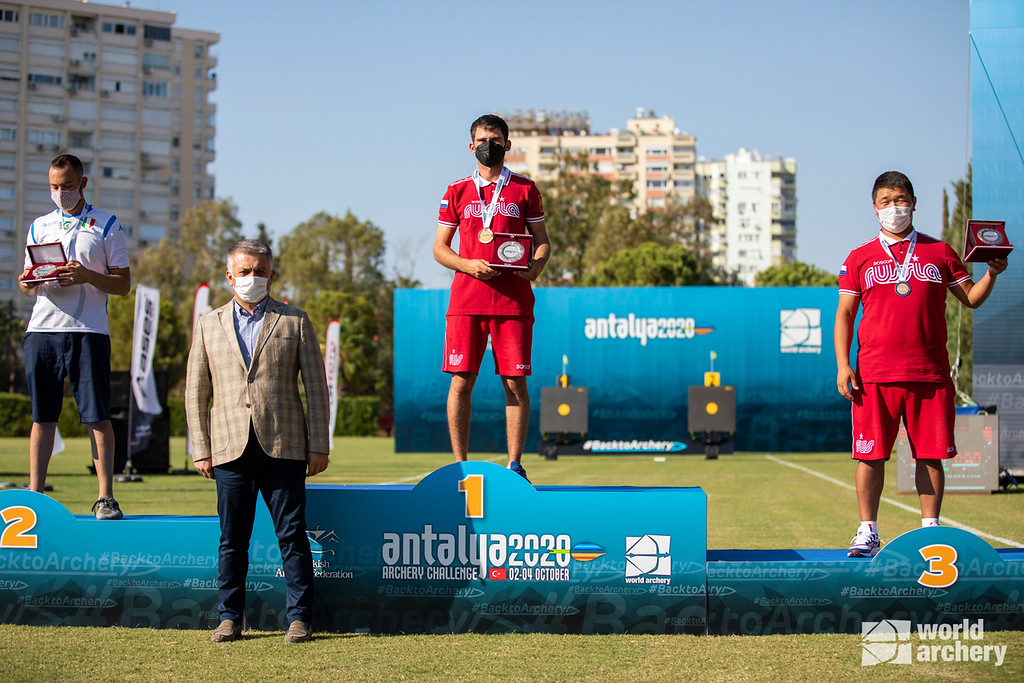 Aside from a lack of spectators, archers wearing masks in between ends or sets and the targets being set further apart, there wasn’t much unusual about the finals in Antalya.

This successful first international sets the scene for a return to a more normal calendar of events in 2021.