BAKU/GENEVA, 16 March 2015 – UNICEF and the Baku 2015 European Games Operations Committee have announced a world-first collaboration that seeks to enrich the lives of young people in Azerbaijan. The agreement gives adolescents a voice on how safe and inclusive sport can benefit their lives, and enhances their role in the development of a social legacy of the Games.

The agreement was signed by Mr Azad Rahimov, Azerbaijan’s Minister of Youth and Sports and Chief Executive Officer of Baku 2015, and Ms Marie-Pierre Poirier, UNICEF Regional Director for Europe and Central Asia.

Minister Rahimov said: “As a young country ourselves, we are committed to investing in our youth to secure a sustainable future. We are delighted to be working closely with UNICEF to maximise the legacy of the European Games and deliver opportunities to involve children and young people through sport across all of Azerbaijan.”

The agreement will include online consultations in 21 districts of Azerbaijan which will feed into a National Adolescent Consultation on Safe and Inclusive Sport, to take place in Baku two days before the Games. A further focus of the agreement is on encouraging young people to become involved in sport in their communities and make full use of the numerous state-of-the-art sport facilities built across the country.

Ms Poirier said: “We know that all around the world, sport is a very powerful tool to inspire passion, bring people together, and communicate important messages about children’s rights on a massive scale.” 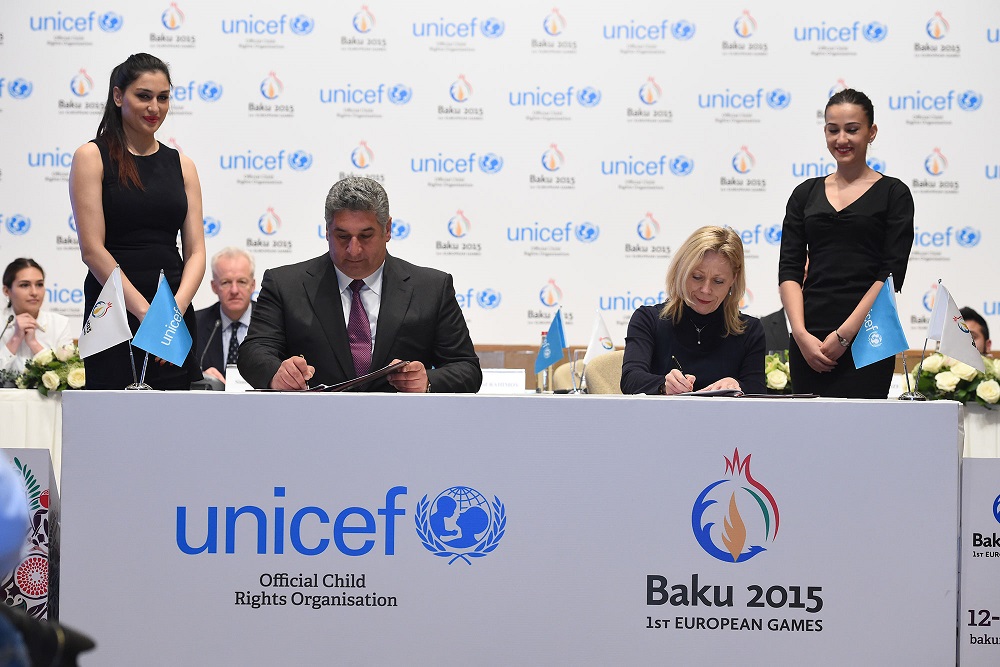 “The Baku 2015 Games represent a unique platform for collaboration between all sectors of society to invest in children and adolescents as the most effective way to invest in society as a whole. The Games provide us with a great opportunity to discuss the right to safe and inclusive sport for Azerbaijani boys and girls, and the role of sport as a tool for the inclusion of the most disadvantaged children and adolescents.”

Simon Clegg, Chief Operating Officer of Baku 2015, added: “This agreement between UNICEF and Baku 2015 is an embodiment of the Olympic spirit that the European Games are bringing to Azerbaijan. My team and I are incredibly excited about how, together with UNICEF, we can deliver life-changing opportunities through sport to the country’s youth.”

Through the programme, adolescents will have the opportunity to discuss the importance of sport in their lives and the opportunities linked to Azerbaijan’s hosting of the European Games and future major sporting events such as the Formula 1 European Grand Prix, the Islamic Solidarity Games and UEFA 2020 matches. They will also exchange information and views on the legacy of sporting events with peers from Brazil, a country that has hosted and will host another global sporting event.

Under this agreement, Baku 2015 will also support UNICEF in promoting the importance of children’s participation in sport through official broadcasting channels and social media, bringing the passion of Baku 2015 athletes and spectators around the world to the cause of all children.