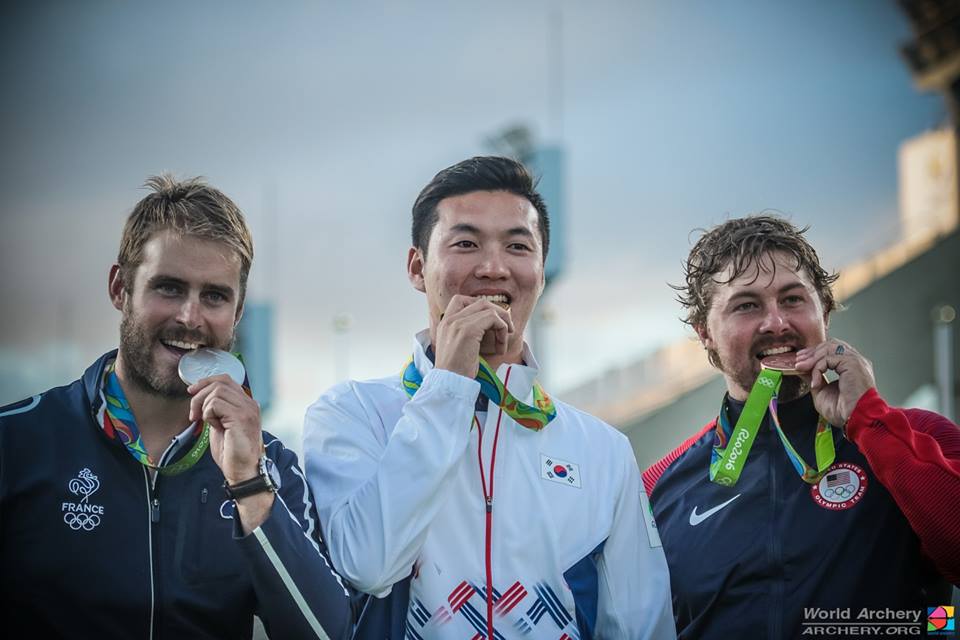 With Ku Bonchan’s victory in the men’s event, Korea won all four titles for the first time at the Olympics.

Korea’s Ku Bonchan survived a pair of shoot-offs in the quarter- and semifinals, then beat France’s Jean-Charles Valladont to Olympic gold in five sets, the last arrows of the Rio 2016 Olympic archery competition.

“I’m so happy tonight is beautiful,” said Ku. He dropped to his knees after winning gold: “It was the most respectful way to give thanks to the spectators who cheered for me.”

After winning his first two rounds in straight sets, Ku needed five sets to win each of the remaining four matches.

Both his quarterfinal with Australia’s Taylor Worth and his semifinal against Brady Ellison, of the USA, went to a one-arrow tiebreaker.

He won the first with a 10, the second with a nine.

Before the final, Ku’s coach, Park Chae Soon, was seen giving him stern instructions in the call room.

“He said, ‘you’re not focusing on your arrows, you’re thinking about the other guy’s arrows and the score. Just focus on what you do’,” Ku explained.

Ku jumped 4-0 up in the men’s Olympic final and then celebrated after the third set, when he looked to have taken a clean-sheet victory. But an arrow of Valladont’s was upgraded in score – it had just nicked the edge of the 10 on the left – and it gave the Frenchman a new lease of life.

Valladont won the fourth set – then shot a pair of eights in the fifth, which Ku capitalised on to take Olympic gold.

Brady Ellison took bronze in Rio. He beat the Netherland’s Sjef van den Berg, 6-2 to the last spot on the podium.

It is his first individual Olympic medal, after being part of second-placed teams in both 2012 and 2016.

After all the competitions at the Rio 2016 Olympic Games, four of the five continents had climbed the podium.